Whether you’re looking to import direct from the States or buy from a UK American dealer, if you have your sights set on driving an American car on UK roads, you’re going to need American car insurance.

From Pontiac and Chevrolet, to Cadillac and Dodge, there are some awesome American car brands that are seriously attractive to UK drivers. Here’s a quick guide to what to look out for when insuring an American import.

American cars in the UK are considered Grey Imports – not available through manufacturer dealerships and with no standard UK equivalent.

All imported vehicles represent the unknown to insurers, which is never a good start. UK insurers prefer to be able to neatly classify vehicles within one of the ABI’s 50 Group Ratings and clearly, they can’t do that with an American grey import.

Add to this the increased costs in parts and repairs, the fact that American models are desirable, eye-catching and often powerful, making them attractive to thieves, and it’s easy to see why American car insurance can make standard vehicle insurers nervous.

FACT: Not all cars imported from America are the massive, souped-up machines many people think of. Hybrids and renewable powered vehicles are ushering in a brave new dawn of American imports to the UK. 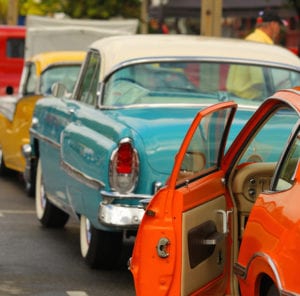 Modifying vehicles is an important part of American automobile culture. Chances are your American car will be modified in one way or another, or possibly you are planning on modifying it yourself? Insurers open to American car insurance are likely to be knowledgeable in this area, familiar with insuring non-standard and modified cars and so less-likely to panic at the mere mention of modifications.

If your American car is modified, consider like-for-like cover for modifications or you may only get the market value for a UK equivalent in the event of a claim.

REMEMBER: Not all modifications increase insurance costs. Be sure to tell insurers about any upgrades to security, tracking, alarms or immobilisers since these may reduce your premiums.

Registering an imported American car?
Look for insurers able to insure based on the chassis number to be sure your covered and legally compliant during the registration process.
Restoring an American car?
Look for laid-up insurance. This will cover your vehicle against fire and theft whilst you’re working on it.
Stocking up on spares?
It’s not uncommon for UK owners of American cars to keep a few spares to hand, particularly if they would take ages to import and replace when needed. Consider spare parts cover if this applies to you.
TOP TIP: Depending on the make and model of your American car, some insurers may request a Single Vehicle Approval Test to be sure that your vehicle complies to UK safety and environmental regulations.

What to look for with American car insurance

American car insurance may be niche, but it’s a growing and competitive market. Many UK insurers will offer attractive add-ons and incentives if you insure with them, which can make it worthwhile. It’s a good idea to look out for:

How to save money on American car insurance

Insuring an American car is no different from insuring any car when it comes to finding ways to get the best deal. Top things to consider include:

Multi-car policies
Many proud owners of American cars in the UK use them as second vehicles. Cars made in the USA are not the easiest on UK roads if you just need to pop to the shops or use for your daily commute. If you have more than one car a multi-car policy can be an economical option since in the eyes of insurers, multiple vehicles equals shared mileage, equals reduced risk.

Restricted mileage
If your super-charged V8 muscle car is only used for weekends and holidays, it makes sense to take advantage of a limited mileage policy.

NOTE: With most UK insurers of American cars it makes no difference to your policy whether your car is right-hand or left-hand drive.

Does American car insurance cover use as a wedding car?

Does it matter where I keep my American car?

Yes.
If you keep your American car off the road, in a private driveway or better yet in a secure garage or storage facility, you should be able to get a better deal on American car insurance.

Can I get American car insurance cover if I’m under 25?

To be honest it’s unlikely. If your American car is a performance car, modified, turbo or supercharged, then pretty much, definitely not. Most specialist insurers offering American car insurance will only insure drivers over 25.

American Car Insurance Articles
If you found this guide useful, why not share it?
Go to Top